Hate...Because Of A Person's Feeling Of Entitlement!

If you look closely at the center of the fire...you might see the image of a sinister, evil face...


Sort of like a demon. Fire, Hate, Burning, Pain...Who will put it out? 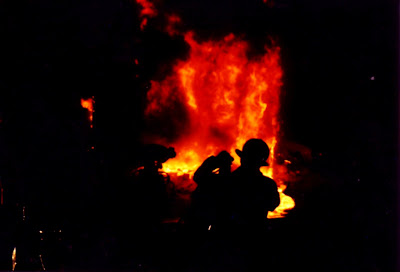 I haven't updated since 15Jul09...I've been busy, weddings, appointments and then the bout of my kidney thing really had me thrown down.


I did do a story for CNN Ireport about the whole Sgt Crowley and Prof. Gates hate thriving media twisting mess.


I live in a Suburb near Cambridge...I know the area. It's like when I lived in Beverly Hills...you cross 1 street and you go from Hell's Kitchen to a totally opposite place. I know Sgt Crowley, personally...as I've worked with him a few times over the past few years. Put it this way, he would always come with his best friend, not that it matters, a black man. He teaches his "racial profiling" classes with urgency to NOT be a racist...people aren't always what they seem...and the folks you'd never expect...are the bad guys...etc...


I also know of the Prof. Gates reputation. He teaches here. My friend, a female, took a course of his for "enlightenment" and bridging gaps. Let's just say this, he bashes the "oppression" thing into the ground...and doesn't have positive things to say about society and good people. He creates a wedge with his teachings of racism and oppression. This is a bit of what I know as a professional...and on a personal level...he's rude, abrupt and arrogant.


The whole media thing grabbed and ran with this...and it shouldn't have happened. People chose sides...didn't have all facts...and it was a crime like the L.A. riots. I lived through that...


One of the very few incidents in Beverly Hills, found me, like always, right smack in the middle.


I was waiting in line for gas...traffic bumper to bumper on Wilshire...as all people were fleeing home. I had friends that flew from Boston and were air born before the Riots broke out. Sitting in the gas line I started to see a crowd of men with bats and chains etc...stomping from car roof top to car roof top...screaming, breaking windshields...etc...


Then I saw a man take a baby from the back of an SUV and run...I was about to get out of my car when I saw that he came back for the mother...it was the station attendant bringing them to safety.

Not that it matters, the mom and child were White...the rescue hero Gas Station guy was Latino...and the violent crowd of men were African Americans.

Then out of nowhere 20 squad cars screeched up with guns in hand. I didn't stay for the rest...

I went home and suffered from the curfews, lungs burning from smoke and asthma...no pay because productions were paused as well as my bar tending job at a bar and grill on Beverly Drive was closed.


These are the type of things that happen when a racial slur is spat...from any culture...and the person feeling "entitled" to hurl these statements are the actual racists.


In the Rodney King example...


The man WAS pummeled by the police. I don't know if it was right or wrong BUT, it went to court and the judgement was made. If people felt a sense of "injustice" for Rodney King...did they have to burn, kill and hate...in their own neighborhoods? Among their family and friends...this is how people screaming "INJUSTICE" are actually aggravating the claim they make...Burning and Killing and Stealing...are all "INJUSTICES"! This is what I mean by folks rallying hate...running with it...and suffering the consequences.


People across all colors and faiths and cultures are doing it everyday. Take it? NO! Deal with it by means of Civilized Humans? Yes.

Right or Wrong...I didn't do it...I had no part in it...So, because a hate rally finds me guilty because of my color, address, car and income...again, having no part in Rodney King's case what so ever...I need to burn, suffer and hide.


Sounds like the events and crimes during Nazi Germany.


In Gates vs Crowley MY opinion is based of personal and professional knowledge. Research from all sides of what the American people were doing and saying.


An assessment of the situation...and the following nonsense that went on and on.

People, including the president were quick to judge and make statements and slurs...without any knowledge of the full facts. BTW it's all on tape.

You can imagine the hate bashing I received on CNN Ireport...the comments people made, in the name of racism...were very racist, arrogant and ignorant. When I asked for the facts that brought them to their conclusion...they fell short.


They were guilty as the supposed crime they were rallying for.


I have just got news from 4 friends that they received a "reference check" call regarding the position I applied for as an advocate for people that don't know the ropes of programs or treatment they are eligible for.


I'd really dig being one of the advocates for folks that need someone like me.

After my whole kidney scare again...I woke up today feeling better...and fearless. When I have a flare up I hibernate...this time I thought I had "end stage renal failure" because, I read a lot of medical sites, and I have no chemistry skills, and I was diagnosing myself. I saw my doctor and same old same old...surgery and remission.At least I know...and have been there a million times.


Sound familiar? Drawing my own conclusions...based on my ignorant opinion. I had myself dead and buried.

Yet...I scared myself to death...and decided, this is my "death sentence" without the proper facts or knowledge. I just decided.

And that not only screwed me with fear...I brought along my loved ones too.
THAT is being guilty of not having enough facts to support my opinion.


Lastly, you know how some of us that are VERY close...full of love and heart for each other... almost pick up each others thoughts? Then call or email or message a few words pertinent to what is going on to someone?

This time it was one very close person in my life to have a turn.

I woke to read, 1 line about today being a great day and feeling fine and yesterday is over and no worries, kind of sentence...in a simple text.

There are no co incidents...and my check in with my heart and soul loved friend confirmed that they just had a hunch.


I'm so blessed...and so are you and everyone.

A lot of people just don't know it.
Some just need to get out of self and into God.
And the world can return to harmony and away from destruction and selfishness.

Buy an elderly woman in line at the doughnut shop....her coffee and muffin.
I do stuff like that to express my gratitude to those that worked so hard for all we have.

Subscribe to James Hillis Ford And His Quest...To Always Do The Right Thing ...And God's Work... by Email

Lead Singer Of A Rock And Roll Hair Band

I Won The Audition And My Beer Commercial Went To Germany...Anyone Ever Hear Of Halston Beer? The Things A Starving Actor Does For A Few Bucks. HaHa!

This is one of my advertisements

He wears a lot of Patchoulli

Toward the end of Jim Hillis Ford's Modeling Days...

Look at my dead eyes.